Interview with John Zawisza, Director of Digital Operations at SG360°.

SG360° is one of the top Direct Mail printing companies in North America, and they service a wide range of customers, of which the majority are Fortune 500 companies. They currently employ over 800 full-time staff, but they also employ a large number of temporary workers that varies based on the amount of work in their facilities in any given week.

John Zawisza, Director of Digital Operations at SG360° says: “I ended up looking into Ultimate Impostrip® probably about 11 years ago as we started getting more and more daily and weekly projects. We no longer wanted to do the imposition on the front end because we preferred to focus on the ripping process, so we needed an upstream solution. The offset solutions we had also could not handle variable jobs. Our volumes were increasing, and we needed a solution that could feed the press.”

“Ultimate Impostrip® was familiar to me because I had used it in previous times, so I downloaded a demo, and I was really impressed how far along it has come and how easy to use it was. I was really impressed with the Dynamic Hot Folder driven workflow. The goal was that once you set up a hot folder, anybody can drop jobs and files into it for fast imposition. It has allowed our operations to be much more flexible.”

So when and how do you use Ultimate Impostrip®? 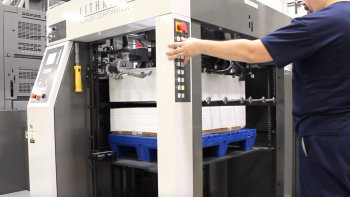 “I do see a big added value in using Ultimate Impostrip because it’s hands off software. Once you create something in a hot folder, it doesn’t matter who gets the files, once they drop it in that hot folder it’s going to end up being imposed. Let’s be honest, when we used to do this manually through other programs, everyone had their own way of doing things, there was no consistency. Ultimate Impostrip adds so much value in delivering consistency and ease of use.”

What about integrating the tool to other systems?

“The funny thing is that most vendors will tell you they are JDF compliant, the thing is that JDF is an open architecture XML, so that means that just because they are a JDF file, it doesn’t mean the JDFs talks to each other.

In other words, everyone has their own dialect to their specific brand or machine. With Ultimate Impostrip, you can easily build dozens of JDF profiles and know how the information will be linked inside Impostrip. This is very valuable. Our goal is to explore doing even more automation with XML integration, while ensuring customers that what we do is always secure and have files processing 24/7 behind the scenes.”

Lean Transformation and the value of workflow.

“We went through a lean transformation a long time ago, and I don’t have staff allocated to every machine anymore. The workflow is different, we now follow the work. In other words: with a late-stage approach, my press man can simply pick up the job, drop it in the appropriate imposition flow and feed their own process. Our team does not sit idle waiting for prepress to end up giving them something to print. This also gives control over the imposition process in production. Therefore, if there is a glitch or a needed change to run more efficiently on the press, it’s a pretty easy fix using Ultimate Impostrip.” 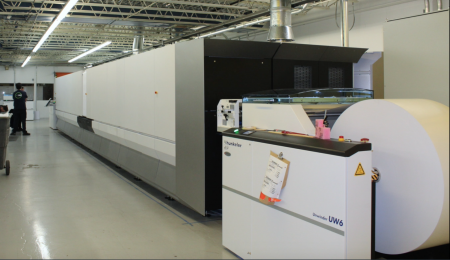 “We use Ultimate Impostrip to feed all our digital presses, running approximately 13-20 million clicks per month in total, so we feed Ultimate Impostrip a lot of work. It can run 10-12 different jobs at the same time and route them to the different presses. During this time, my prepress team focusses on more value-added work such as alterations, color corrections, and more. Since we are a Direct Mail printer, 98% of our work is variable. We do have some ad-hoc work, even then Ultimate Impostrip being an easy hot folder driven workflow is an asset. Even for these, we do not need to manually prepare jobs.”

What benefits do you get from automating your imposition?

“I actually eliminated most of my downtime on the presses. We are no longer waiting for files to end up coming out because they need to be imposed. There are other standalone imposition solutions out there, but they do not have that type of automation which can cause press down-time and that’s not acceptable. Having Ultimate Impostrip enables us to actually accumulate jobs and now my people actually are pulling work in, instead of having jobs pushed at them.”

How did it scale your business?

“Ultimate Impostrip has allowed to scale our business. It has grown with our production and the fact, that it allowed my entire department to grow, was one thing that I didn’t have to worry about. When I’m getting new technologies in here as far as presses, new staff and trying to adjust workflows, Ultimate Impostrip is one thing I do not have to worry about. We are able to throw anything at it and it will actually keep up and surpass the process.”

Where do you see your company in 5 years and the future of Direct Mail?

“The company will continue to grow. One of the big things is that we made an investment in digital printing, toner and inkjet and I think this is good for the future. Moreover, with all the issues going on in the world today, businesses having to open-up and close down again, I think it’s going to actually drive more digital printed direct mail, because there will be a smaller window for delivery, eliminating the 3 to 6 months lead time for a mail campaign.”

“I also think mail is going to be even more important. As much as people are on social media, and emails and everything else, they will become in a way, blinded with it all. Getting that piece in the mail is more convincing and impactful and will lead to more action and conversion.”

SG360° started their operations in 1956 as The Segerdahl Company, then rebranded in 2012 as SG360° to better communicate their full scope of product and service offerings.

SG360°’s customer base is made up of Fortune 1000 companies and national non-profits, with areas of specialization that include Financial Services (lenders and credit card services), Insurance, Travel and Leisure, Automotive, Healthcare, Retail/E-tail, Telecom, and Consumer Goods.

Keep in touch with us